Sustainability – By Choice, or by Force 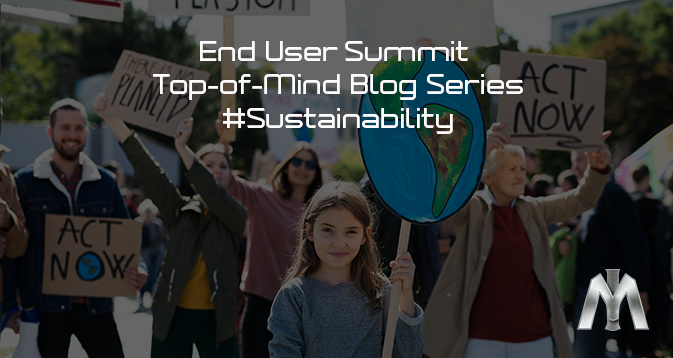 The digital infrastructure industry is more sustainable today than in the past. But many of the gains are the result of migration from on-prem to more efficient cloud data centers. When the majority of workloads are in the cloud, data centers will have to support much more scale with the same or fewer resources. That will require industry-wide collaboration and truly disruptive innovation.

This is the second in our End User Summit Top-of-Mind Blog Series, which reflects the top issues discussed during the Infrastructure Masons October 2019 End User Summit in San Jose. Summit attendees included senior-level end user leaders from across the globe, IM Foundation Partner executives, and members of the Diversity & Inclusion (D&I) Committee.

Digital infrastructure growth in the last decade has actually been more sustainable than one might guess. According to a May 2019 tracking report by the International Energy Agency (IEA), while internet traffic has risen 419% since 2015 and data center workloads have risen 213%, data center energy use has remained about the same. Likewise, water consumption has remained fairly constant, rising about 5% between 2014 and 2020, according to a report by Lawrence Berkeley National Laboratory (LBNL).

Much of that is owed to enterprises moving their workloads to the cloud; generally speaking, hyperscale cloud service providers are more efficient than enterprise or even colocation data centers.

But what happens when the majority of the workloads are already in the cloud?

Research by Dale Sartor, a staff scientist at LBNL, shows that once we hit the tipping point where most organizations have moved to the cloud, the energy demands of digital infrastructure will again start to rise. “I don’t think anybody envisions a reduction in the growth of our appetite for computation,” Sartor told WIRED. “So the chances we’re going to see an explosion in energy use sometime in the next couple of decades is pretty high.”

“To date, many of the gains in sustainability have come from widespread migration to more efficient cloud service providers. What happens when the majority of the workloads are in the cloud?” – Click to tweet

Sustainability is a pre-requisite for scale

Avoiding an explosion in energy and other resource use while scaling 39x or even 6x – that is, figuring out how to scale more sustainably – is one issue keeping many Infrastructure Masons up at night.

As one end user put it, “It’s not that we’re scaling because we want to scale. It’s that we have demand from customers who want us to do more, more, more. And the cloud is becoming so centric to how we live and how we do everything that the scale will be a force majeure. We can’t stop it. I think more companies – especially the large ten – are spending the time to understand that if they don’t improve sustainability, they won’t be able to scale.”

Beyond enabling scale, making progress on sustainability will also be essential to staving off what one end user called an existential threat to the industry: regulation. For most end users, the goal is not to avoid regulation altogether, but to take part in crafting it. “If we don’t take a more aggressive posture on sustainability related regulations,” one end user said, “uninformed people are going to do it for us. And that will be much worse.”

“Beyond enabling scale, making progress on sustainability will be essential to staving off what one end user called an existential threat to the industry: regulation.” – Click to tweet

There was broad consensus at the End User Summit that the digital infrastructure industry has made good progress in many areas – sourcing renewable energy, for example – but not in others, like water use and the continued reliance on diesel generators.

As one end user said, “As an industry, we all are addicted to diesel generators. I don’t necessarily think it’s driven by data; there are other ways we could ensure availability and uptime. But regulations like the Payment Card Industry Data Security Standard (PCI DSS) require data centers to have diesel generators.”

Another end user praised the industry’s move to get more energy from renewable sources. “I think there are pretty good initiatives around making sure that through the grid you’re sourcing renewables [though perhaps not in Virginia]. I think people are starting to sign up and get ahead of it.” But on water consumption, the same end user said, “I think we’re god awful.”

Solving the problem will require everyone

Figuring out how to do more with less will absolutely require innovation. “The only way for us is to deal with this is to create a much more creative way to solve the problems,” said one end user.

But the ability to innovate is not spread equally among industry players. “There is no reason why the hyperscalers investing heavily in sustainability can’t share best practices to help some of the small players be sustainable,” suggested one end user.

What might that innovation look like? One end user suggested it might be done “through a circular economy – by intentional colocation of our facilities with adjacent industries. So we could partner with a waste water treatment plant or with a desalinization plant, for example. Desal plants need to preheat water before they desalinate; we could recover the waste heat as an energy source.”

Innovative ideas aren’t new. “There was a theme maybe 10 years ago of data centers with no people in them,” said one end user. But widespread adoption of so-called lights-out data centers never materialized. “They never materialized because the growth was so fast that we couldn’t actually afford to spend the time innovating new solutions,” the end user said.

That will have to change.

“Innovative ideas aren’t new. But they never materialized because the growth was so fast that we couldn’t actually afford to spend the time innovating new solutions.” – Click to tweet

As if innovating new solutions weren’t enough of a challenge, there is also the issue of countering the growing negative perception about the environmental impact of digital infrastructure. That too, will require a concerted industry-wide effort.

“A couple times a year at the industry conferences we should all work together to put a positive spin on our sustainability efforts – a spin that can at least get recycled into news,” said one of the IM Foundation Partner executives. “The problem is there’s no soundbite saying the good that’s been done. So we should talk about how we saved so many gigawatt hours of energy through the use of cloud data centers, for example. We can talk about some of the design efficiencies.”

Countering negative perceptions goes hand-in-hand with helping shape sensible regulations. One end user talked about how he worked to get his data centers EPA ENERGY STAR certified. “I thought, ‘If I don’t participate with the regulators, it’ll turn out badly for me in the end.’”

“Countering the growing negative perception about the environmental impact of digital infrastructure will require a concerted industry-wide effort.” – Click to tweet

Since sustainability was determined to be the ultimate imperative at our Global Member Summit in London last November, Infrastructure Masons is facilitating collaboration among industry leaders to determine an Action Plan for a Sustainable Digital Future. Through a series of workshops held around the world, we’re leveraging members’ brain power to progress the Action Plan. We’ll share it publicly during the United Nations’ 75th Anniversary Global Sustainability Summit in September.

There was broad consensus among End User Summit participants that being forced into sustainability is not ideal. But that’s exactly where business as usual leads. Supporting scale once the low-hanging efficiency fruits (i.e., migration to the cloud) have been picked will require truly disruptive innovation – not just more of the same. And that will require the participation of everyone in the industry.

Check out these previous posts in the End User Summit Top-of-Mind Blog Series:

And stay tuned for these upcoming posts:

The Digital Infrastructure Supply Chain: We’re All in This Together