A Bottom-up and Top-down Approach to Talent 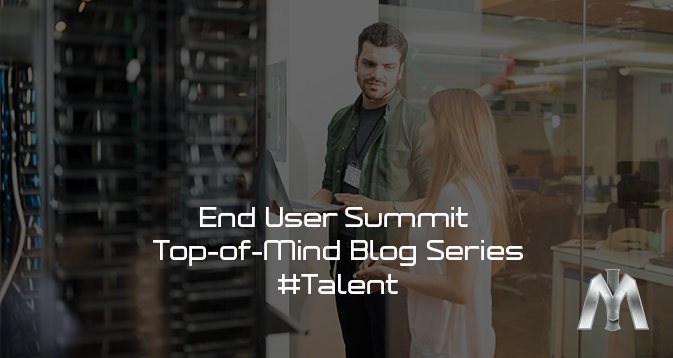 Given the digital infrastructure industry’s rapid growth and a national unemployment rate of less than 4%, it’s hardly surprising that talent remains a top-of-mind issue for industry leaders. At the End User Summit, attendees shared insights on why the talent challenge is so big (in part, it’s because technology is changing so fast). They shared concerns over the far-reaching impact of the talent gap – and ideas for how to solve it.

This is the fifth in our End User Summit Top-of-Mind Blog Series, which reflects the top issues discussed during the Infrastructure Masons October 2019 End User Summit in San Jose. Attendees included senior-level end user leaders from across the globe, IM Foundation Partner executives, and members of the Diversity & Inclusion (D&I) Committee.

Yes, there is more demand for talent in the digital infrastructure industry than supply of it. That is true at all levels. But even educating enough people in trade school and college won’t solve the problem entirely. Because as digital technology – and the industry that supports it – evolves, skill requirements change. As one end user explained it, “The people that were doing more of the hardware work or the IT services are moving up in the stack. The automation, the machine learning, the AI are really enabling us to do even bigger things.”

As the industry evolves, skillsets need to evolve too.

The alternative, as one end user described it, is tragic. A failure to help people evolve their skillsets would mean that many people get left behind as technology – and with it, much of society – advances. “Let's just take it to the extreme and think about the people who are cleaning the floors. Nothing really changes for them even as the technically skilled people move up the stack. That creates a bigger gap between the haves and the have-nots.”

The growth of the digital infrastructure industry is actually widening the gap. That’s a problem not just for society but for the industry as well. “We need people,” said one end user. “How do we actually bring more people along in this evolution?”

Bottom-up, top-down – and sideways, too

So talent development has to continue throughout a person’s career. The industry has to both attract new talent and develop existing talent. As one end user explained it, “We recruit them when they're young and get them in the industry. But we have a lot of executive leadership leaving the industry. So there's a gap at the top as well. It really needs to be a bottom up, top down initiative of education.”

Internal cross-training can help by building broadly applicable skillsets among existing employees. One hyperscale leader explained, “We have a program, I think it’s called school bus, where for example a facility manager from Atlanta will go to Oklahoma and they'll cross-train and exchange best practices.”

The same concept can be applied to filling open positions with people from outside the industry. One partner talked about a program that accelerates onboarding by bringing in people with relevant skillsets from related industries. “Our solution is called the ‘hard hat in hand’ program. It's taking people from other industries, like construction, and in a very short period of time getting them infused into the digital infrastructure workforce.”

“Talent development has to continue throughout a person’s career. The industry has to both attract new talent and develop existing talent.” – Click to tweet

End users talked about a catch-22 associated with rising reliability in the industry. As one explained, “From a data center perspective, we’ve built in such a level of redundancy that we have fewer failures. So people who are new to the industry aren’t tested. Once the older leaders – who’ve been battle tested – retire, and a failure happens, people aren’t going to know what to do because they haven’t experienced a failure before.”

For that reason, and others, ensuring the passage of institutional knowledge from one generation to the next is essential. “We have to have that continuity of understanding. It’s not just about training people to be good technicians, but to think differently. That's a higher level educational piece that we need to be able to address.”

Training matters, but so does real-life, hands-on experience. As one end user said, “The higher the reliability, the more complacent people will get. How do you prepare them for whatever inevitability that's going to happen? Do you do drills and testing and training around that?” For many end users, the solution includes failure drills. One hyperscaler explained, “We call them dirt tests. We pull the plug – not just on the data center but also on the software side.”

A better place to work

The most effective education, training programs, and drills won’t matter if digital infrastructure isn’t a great industry to work in. The tough issues facing the industry, like scale and sustainability, can easily lead to burnout. Leaders need to take care of their existing talent.

“Our jobs as leaders is to make sure people go home,” explained one partner. “Maybe a little tired, but better and with more dollars in their pockets than when they came in.”

It’s not easy, given the tremendous pressures people in the industry inevitably face. “There is a very frank discussion about the stress on many people in our industry and specifically in the contractor community. The pressure we put on some of these people to deliver on super tight timelines is intense,” one partner said.

He explained how one company started hosting mental health workshops for contractors. “The company thought nobody would turn up. But actually streams of contractors are coming in and talking about how their work is ruining their marriages. They say ‘I can't do this.’ They're drinking a lot more. They're exhausted since there's just this small pool of contractors.”

“Any end user would hate to hear that they are causing these issues, but they are and they don't recognize it,” said the partner. “It’s poor forecasting and it’s putting tremendous pressure on the consultants, the contractors, the subcontractors, the manufacturers, the delivery organizations. It could be relieved by just having more advance notice and better forecasting.”

Talent will no doubt always be a challenge. But confronting the challenge from the bottom, the top, and the sides; giving people development opportunities throughout their careers – and hands-on experience dealing with crises; and working to allay the kinds of pressures that affect workers’ health will ensure that the digital infrastructure industry continues to grow anyway.

Check out these posts in the End User Summit Top-of-Mind Blog Series: